Our coalition is growing, and we're so glad you're here with us!

This fall has been a whirlwind as students, parents, and educators have tried to make the best of a bad situation. Our coalition has been on the frontlines calling for health and safety initiatives, better investment in our schools, and an end to hybrid. We’ve been busy, to say the least!

Here's what we've been up to over the past six months:

This spring, we held an online Student Town Hall. Our Co-Chair Shameela facilitated a robust conversation with students who spoke up about their own experiences with the hybrid model. We are so proud of these students for speaking up loudly about how hybrid has affected their learning and mental well being while also dealing with the isolation of a pandemic. We encouraged folks to participate by sharing on their social platforms with the hashtag #StudentsSayNo. The Town Hall garnered over 1000 views and continues to circulate. 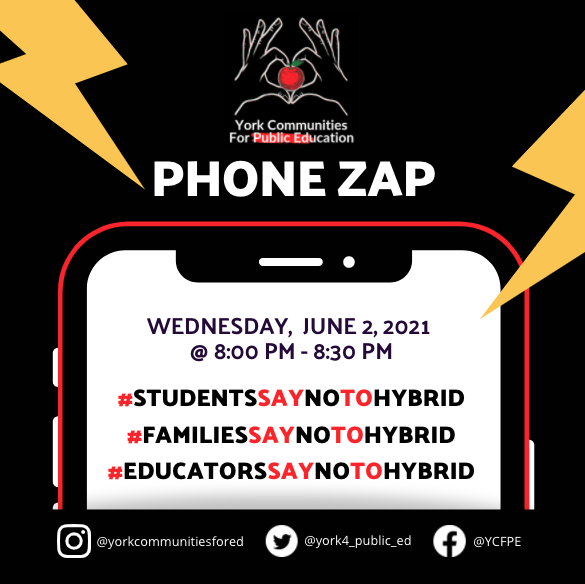 In June 2021 YCFPE organized a successful #NoToHybrid Phone Zap. Co-Chairs Shameela and Riya lead a community of students, parents, education workers, and educators to make phone calls to school boards, trustees, MPPs and the Minister of Education, Stephen Lecce, calling on them to stop enforcing Hybrid within our school communities in Ontario but especially in York Region. It was a powerful way to bring attention to the concerns regarding the hybrid learning model. We felt that each of these contributed to the York Catholic District School Board from dismantling hybrid in June 2021, The York Catholic District School Board announced that it would not go ahead with hybrid in their elementary schools. Advocacy by many students, families and educators contributed to the decision to remove it, showing that community coalitions work! 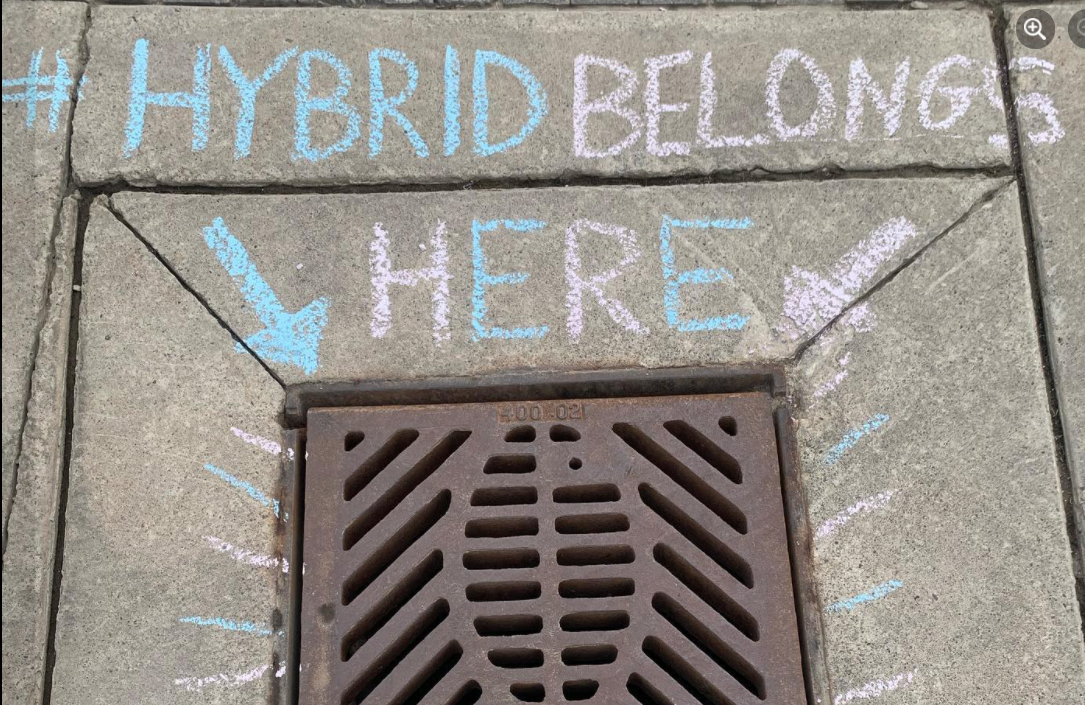 #NOHYBRID ChalkTalk at Riverwalk was an incredible  success this summer. We used chalk art as a way to invite community into conversations about why we are saying #NoHybrid while at a local Farmers Market. Students, parents, education workers, and educators had a chance to speak with the public about why hybrid is never a good way to teach, learn and is ultimately an attack on publicly funded schools in Ontario. We had members of the public writing messages in support of abolishing hybrid from all Ontario Schools. All the creative messages written in chalk, in and around the Farmers Market that day were creative, powerful, and thought provoking. The event brought out hundreds of people, engaged the community into the issues of the fractured hybrid learning model,  and it also gained wonderful media coverage across the GTA. 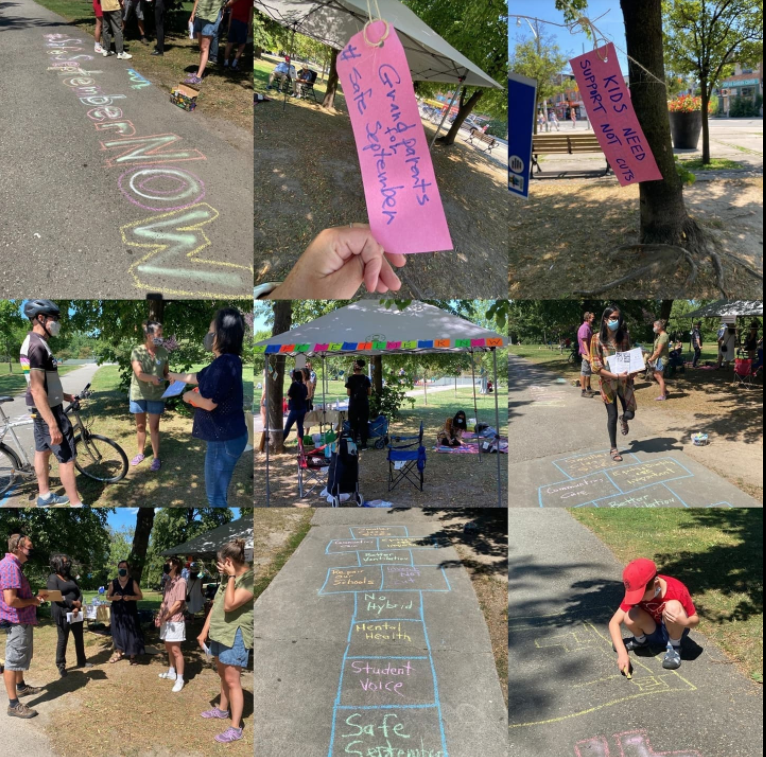 In August, our member Sandra Huh hosted a #SafeSeptemberNow Event along with other parents and educators at Christie Pits park in Toronto. During the  event, members of the public were asked to think about what a Safe September in schools would look like to them and then to bring their concerns up to their local MPP, School Trustee and Minister of Education. There was a great turnout, including a visit from local MPP Jessica Bell (NDP) and from CBC News. YCFPE hosted a mini social media campaign to support our members' advocacy efforts. YCFPE continues to push school boards, school trustees, MPPs and the Minister of Education on issues that persist in schools, specifically: overcrowded classrooms, better ventilation, quality PPE, vaccinations, and supporting the mental health of everyone teaching or learning in schools. 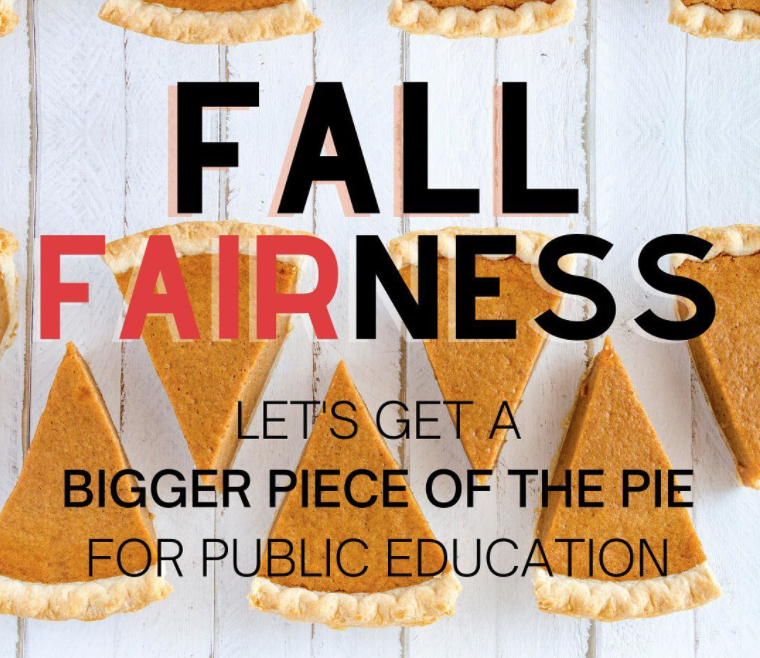 YCFPE hosted a tent at the Woodbridge Fall Fair. We themed our activity "Fall FAIRness" to build awareness about our advocacy and our coalition. We engaged in many discussions, met lots of families and kids and had lots of fun with the public as we shared our concerns about publicly funded education, and next steps to advocate to enhance resources and funding to our schools. 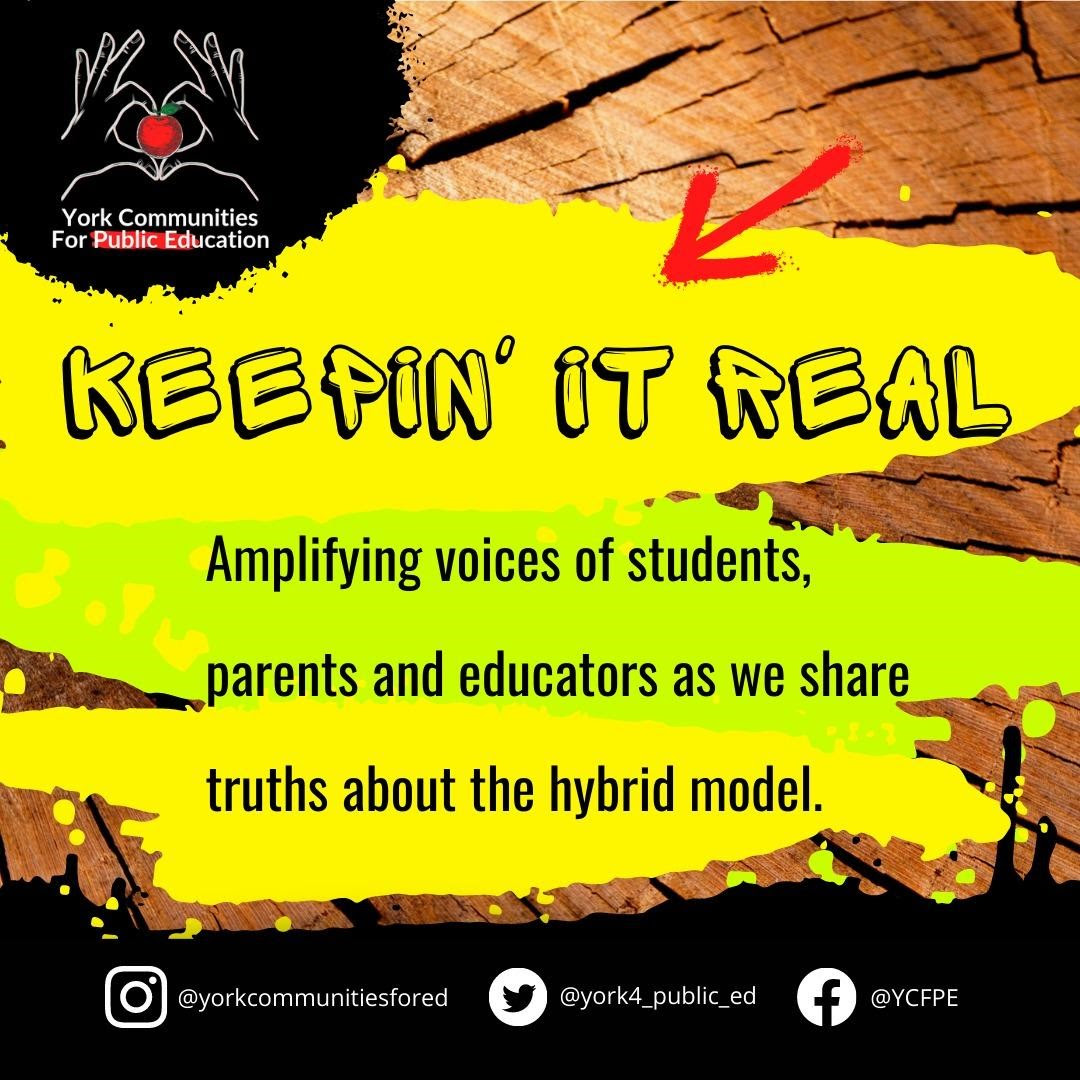 Keepin' It Real with YCFPE

In mid-October we hosted an online discussion with students, parents and educators who have and/or are currently dealing with the hybrid model. Through speakers, panels and testimonials, the event highlighted the inequities, mental anguish and disruption to education that hybrid brings. YCFPE Co-Chairs Riya and Shameela bore witness to first-hand accounts of what hybrid has done and is currently doing to students, parents and educators in York Catholic and York Public District Schools. We want to thank all those who came and were willing to speak up about their experiences with this inequitable, fractured and unsound learning model. 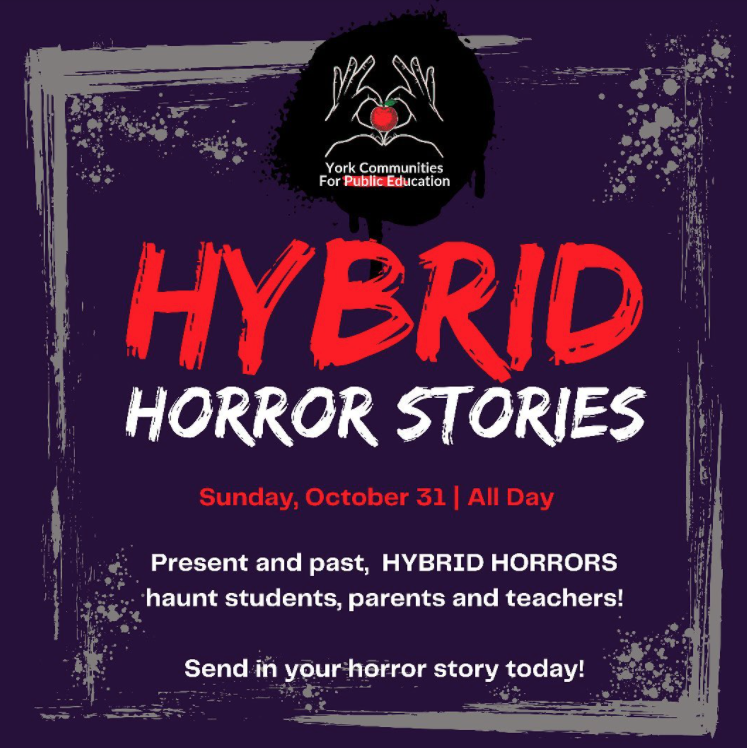 Hybrid Horror Stories launched in the week leading up to Halloween and was a unique way to create dialogue about the hybrid model while haunting local MPPs, trustees, and  Stephen Lecce - the Minister Education. It gave us time to reflect on the fact that we are still currently dealing with hybrid in York Public District schools and other regions in the GTA.  We had a significant call for help from a few students in Peel District School Board. We amplified the stories of distress from students, parents and educators as they continue to deal with this model during a global pandemic. YCFPE will continue to move towards advocating that the Provincial government and school boards fund face to face learning that gives students and educators the ability to have fair, equitable, safe, well structured and mentally healthy schools. 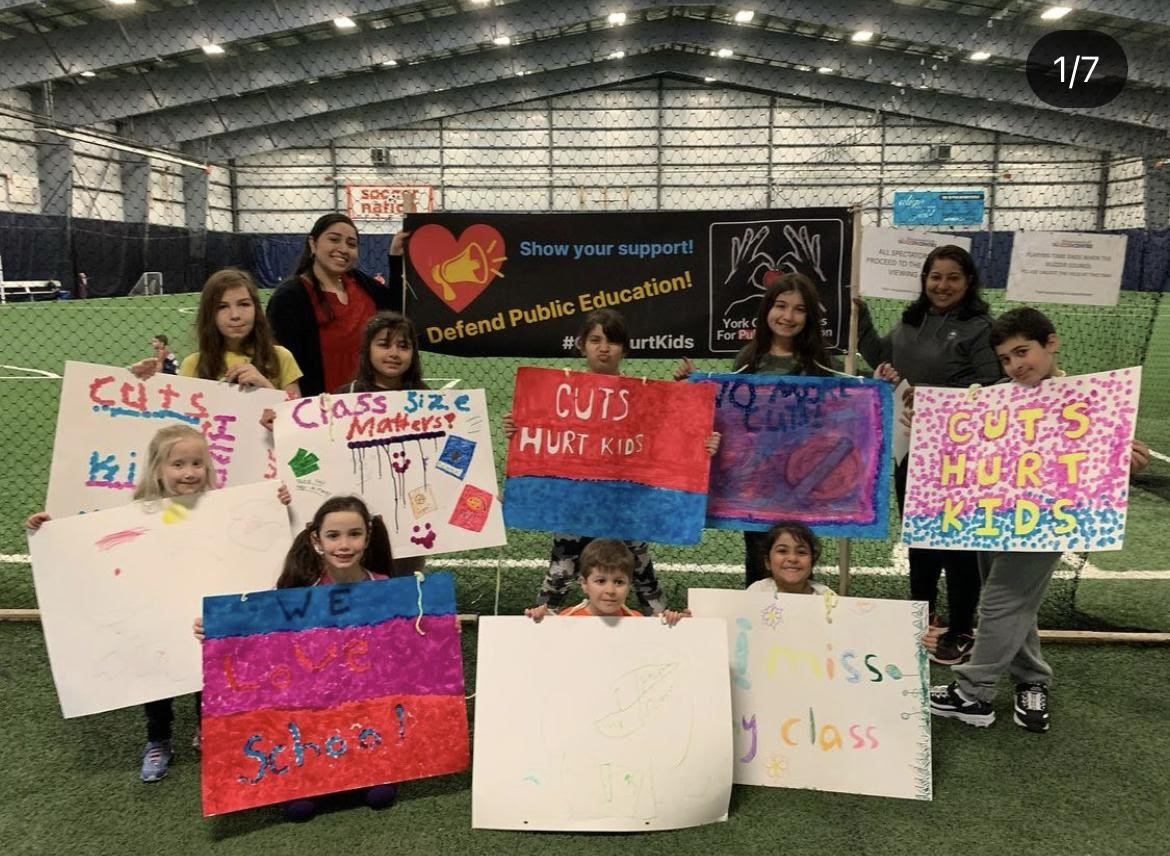 November marks the end of term for YCFPE's first co-chairs, Shameela Shakeel and Riya Bhatla. While Riya will continue to serve as co-chair, Shameela has decided to put her considerable energy and talent into other pursuits. Below, Riya wishes Shameela well and offers a thank you from all of us. 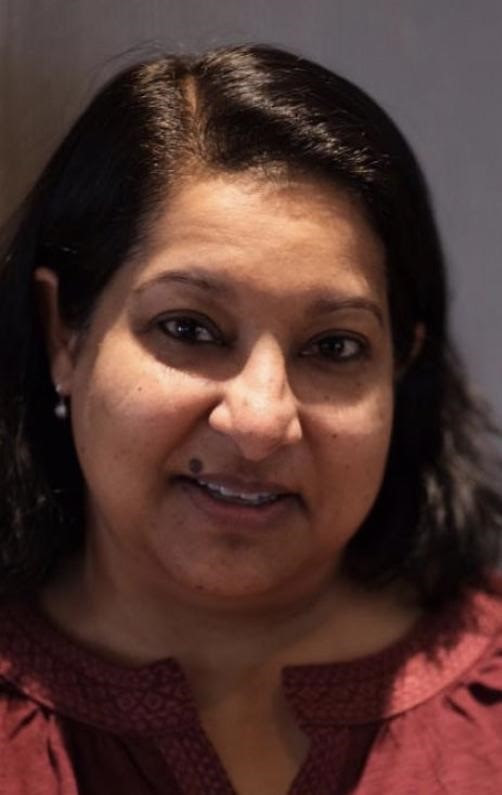 On behalf of York Communities for Public Education, I would like to extend my sincerest gratitude to Shameela Shakeel, our outgoing Co-Chair. Ever since the coalition began in May of 2019, Shameela has worked hard to amplify the voices of parents, educators, and students in York Region. From moderating roundtables to speaking to the media on key issues, to organizing solidarity camps for students while educators were on strike, Shameela has gone above and beyond to protect publicly funded education. She was never afraid to speak the truth, demand better for students, families and educators, and to say it how it is and call out decision makers for disregarding key stakeholders.

Over the years, Shameela has helped our coalition gain broad recognition and respect throughout York Region and the GTA, and has represented us with grace and passion on various media and panel events across Ontario. 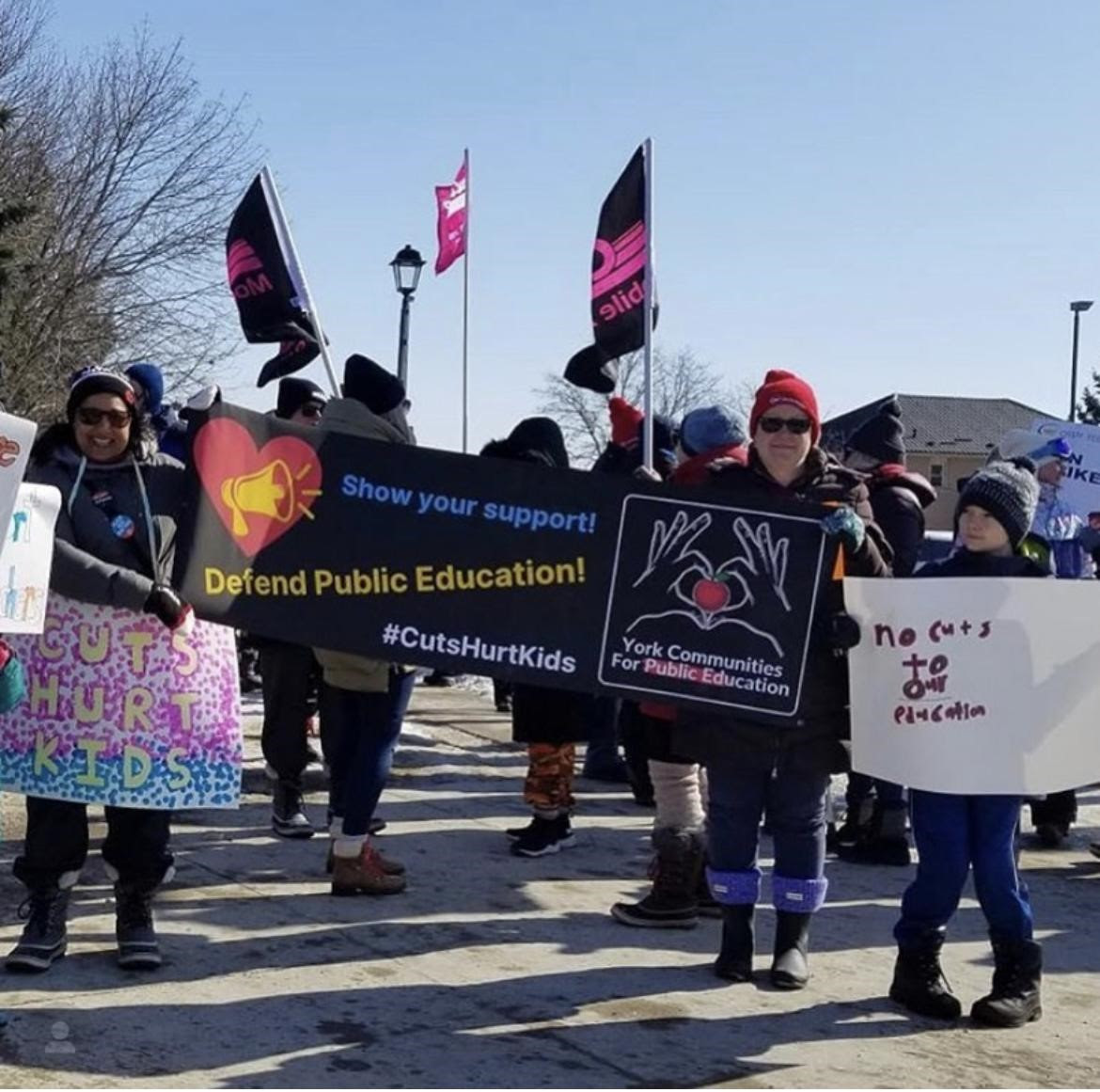 Most importantly, Shameela led with empathy and determination. She has had a profound impact on protecting and enhancing equitably publicly funded education in York Region and the GTA, all the while being a mother to four children and having a professional career.

Shameela, you will be greatly missed as my co-chair, but I am glad you will remain a part of the YCFPE family as we move forward with our bold initiatives. We wish you luck in all of your new adventures and endeavours.

Got an idea, a question, or simply want to get more involved? Let us know! We'd love to hear from you.

Thank you for being a part of our community. When it comes to our kids and our schools, we need to stick together – that’s why your support is so important!